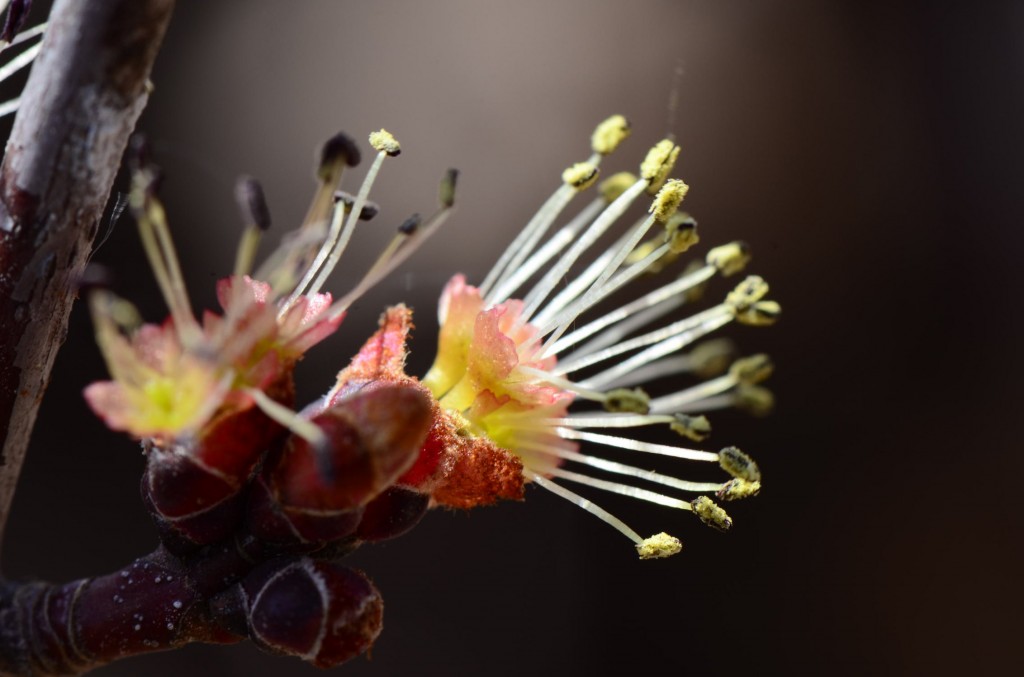 It hit 23 Celsius in Ottawa today, so I packed my camera and headed out to Mer Bleue for my first photo trek of the season. It’ll be another week or so before the spring wildflowers get into full swing, but I came back with a great preview.

Red maple flowers before the leaves come out, giving the tree a red halo that it quite striking against the bare branches. Silver maple, Acer saccharinum, flowers are similar, but yellow-green rather than red. They bloom about a week earlier, but their season is long enough allow for occasional hybrids to form. The male and female flowers are usually on separate branches, and young trees may have only one sex or the other. These blooms were on the big tree at the start of the Mer Bleue boardwalk. 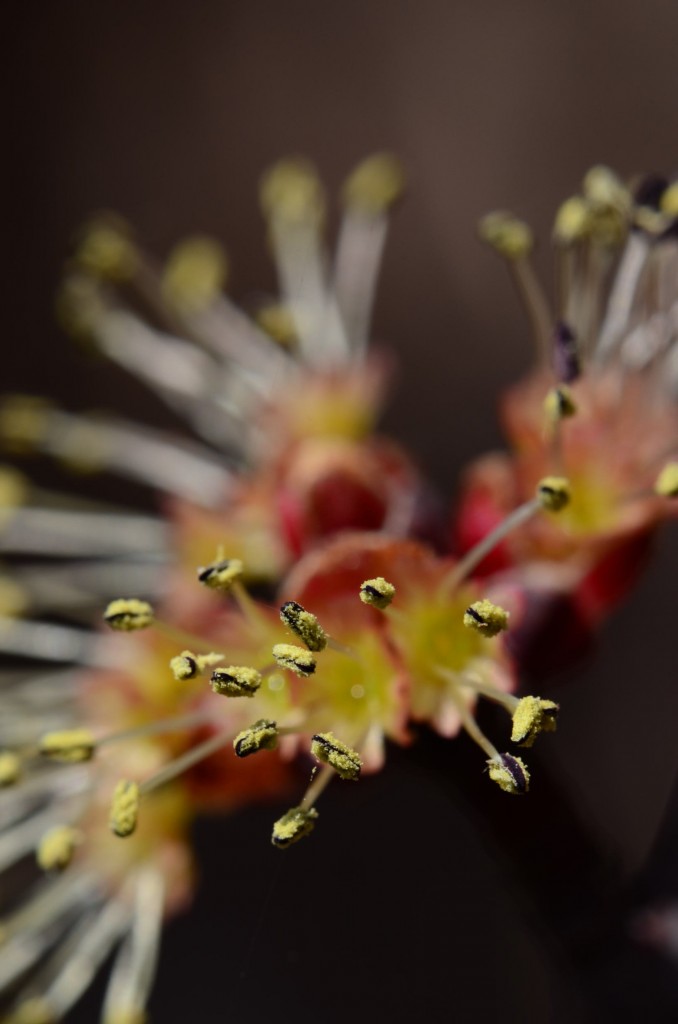 The fresh anthers are bright red. They split open to reveal the yellow pollen. As the pollen is shed, the dull red inner surface of the anther remains briefly before the flower falls apart. The shiny spot at the base of the flower is the nectar produced to attract insect pollinators. 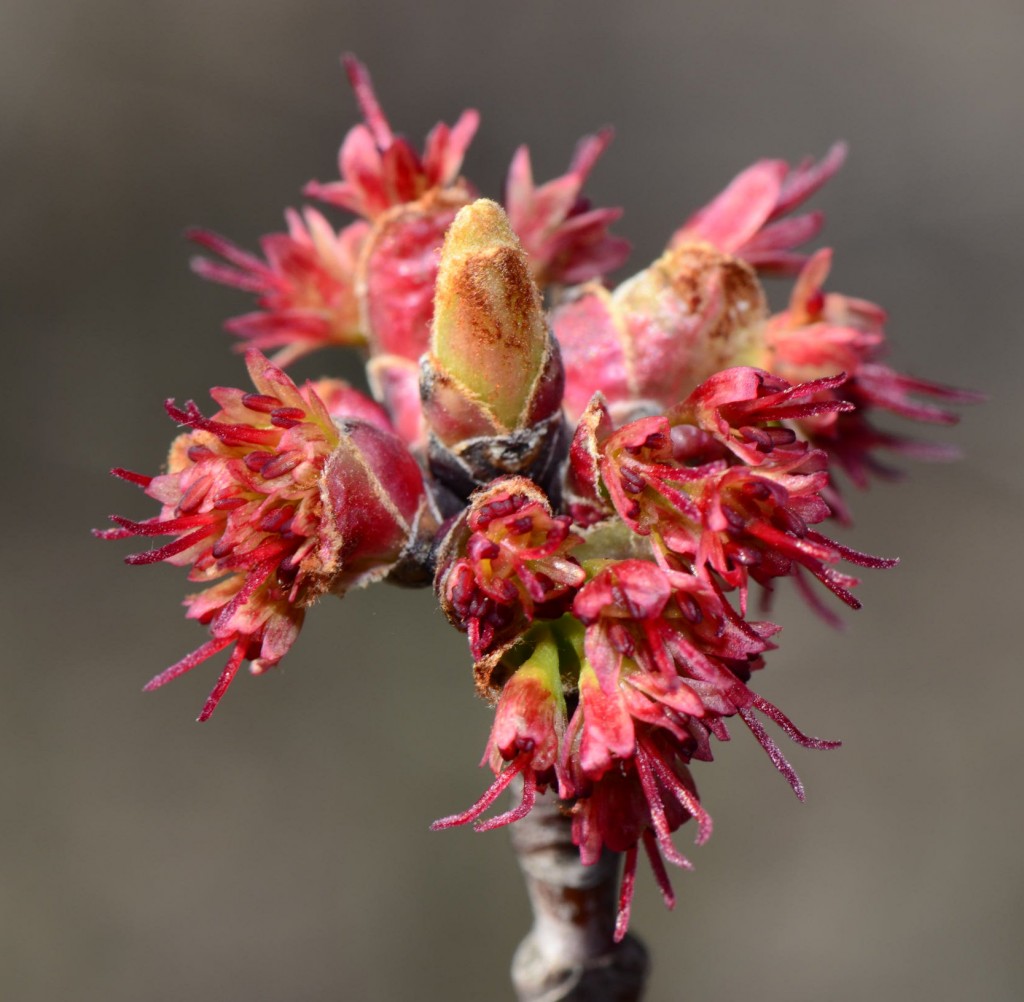 Sterile anthers are visible at the base of the female flowers. The tiny ovaries are already shaped like miniature maple keys, surrounded by a swollen nectary. You can see these features with a hand lens, but it’s too small for me to get a clear picture with my SLR. 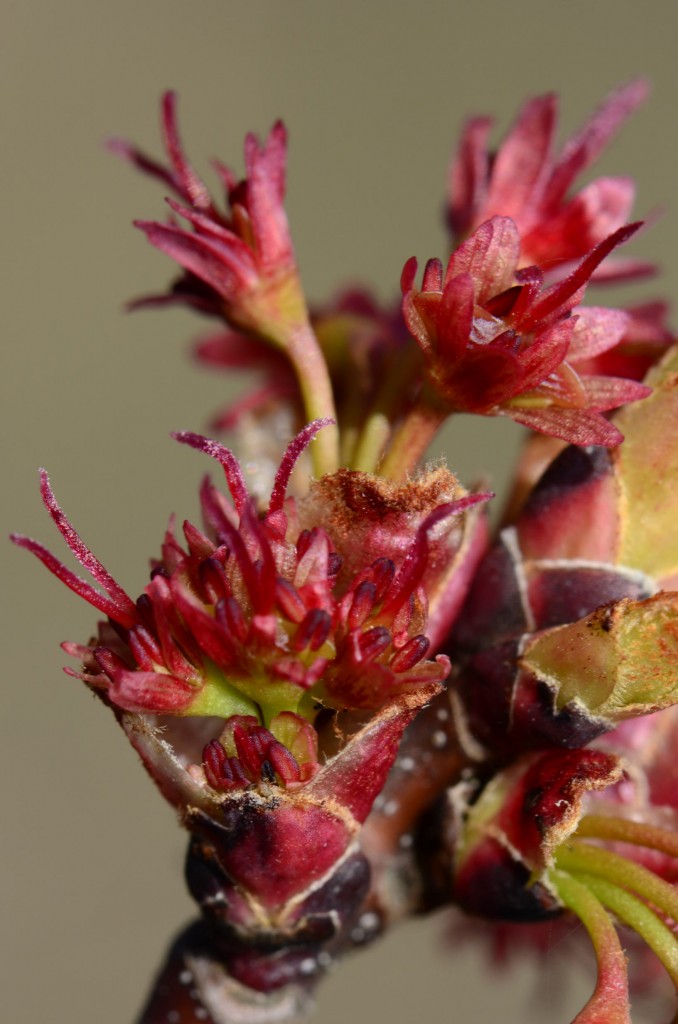 I got a nice view of the female flowers out at the road. There were also some small, apparently all-female trees right at the start of the boardwalk. 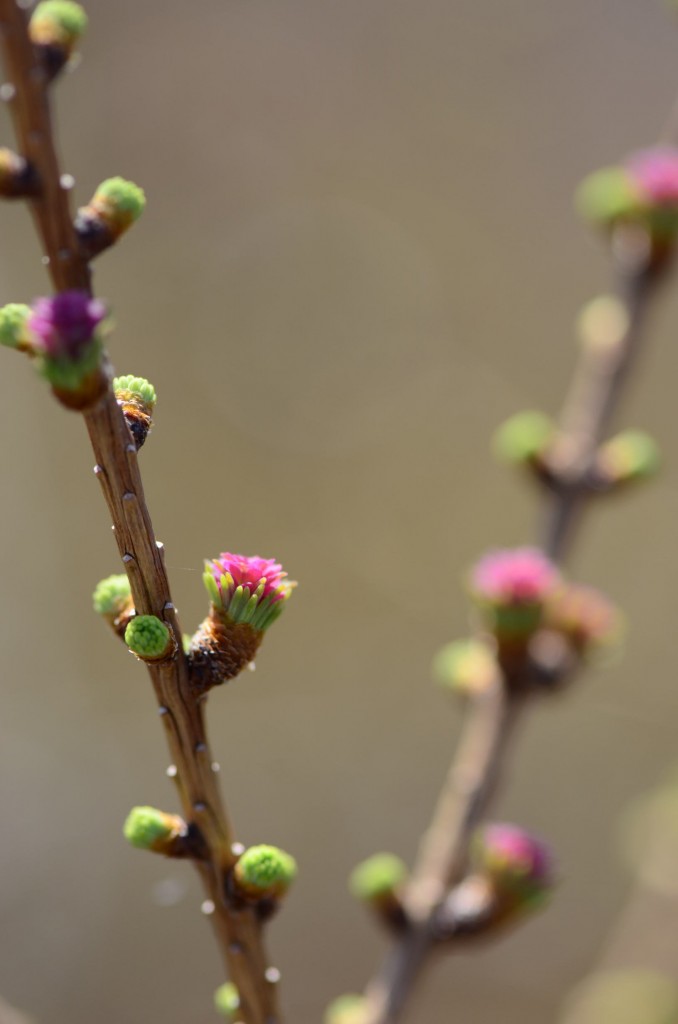 I’ve never stopped to look at young Tamarack cones before. The female cones have a rich pink-red colour, which contrasts nicely against the new green needles. Being deciduous, the needles will be gone by the time the cones mature into the more familiar woody form. 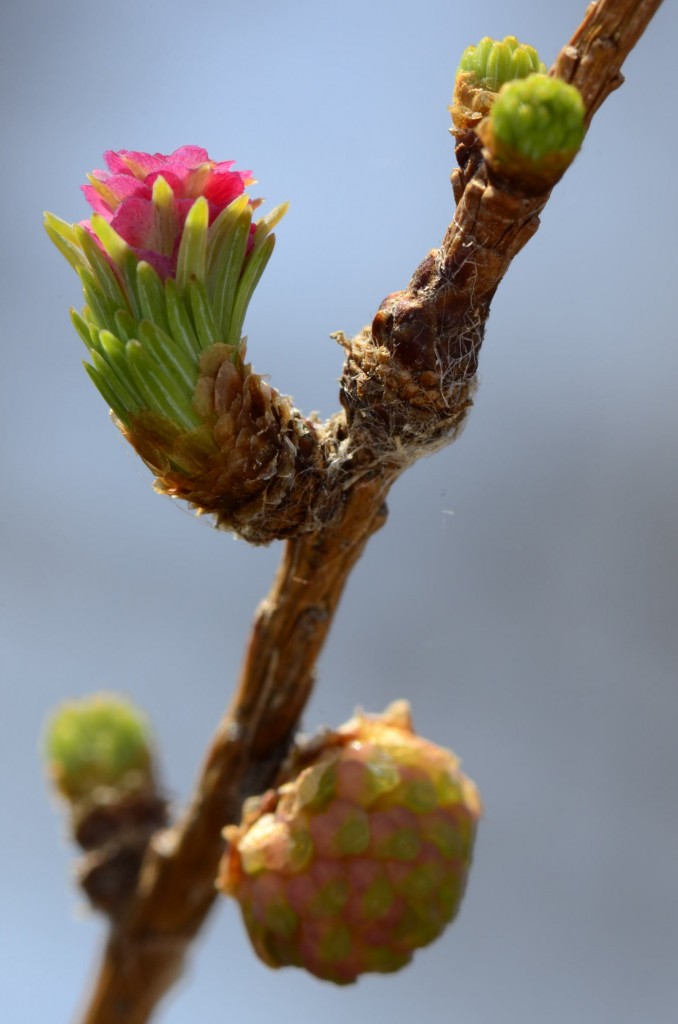 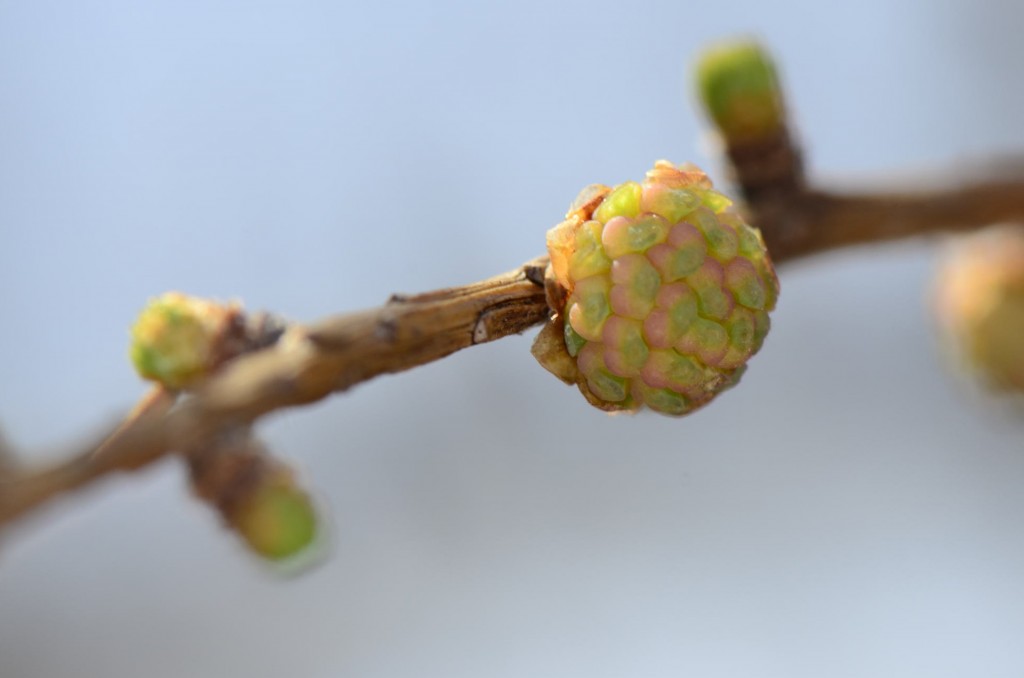 The male cones face downwards, and aren’t as brightly coloured as the female. They weren’t quite mature today, but they’ll probably start shedding pollen this week. 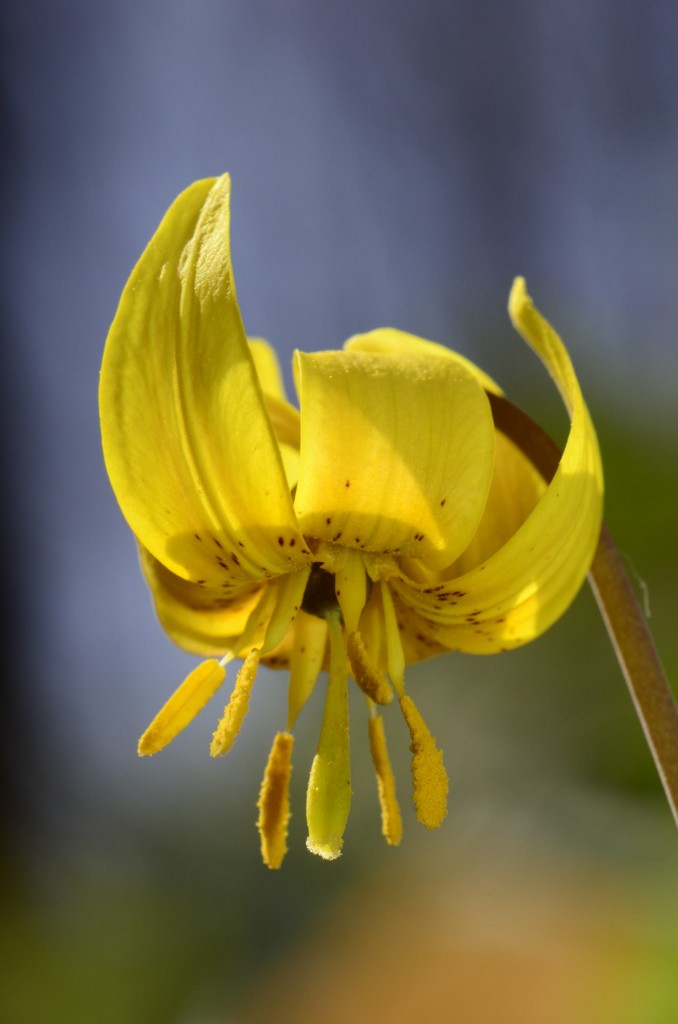 There were a few Trilliums and Bloodroot poking up, but the only showy spring wildflower I found were a handful of Trout Lilies, Erythronium americanum. 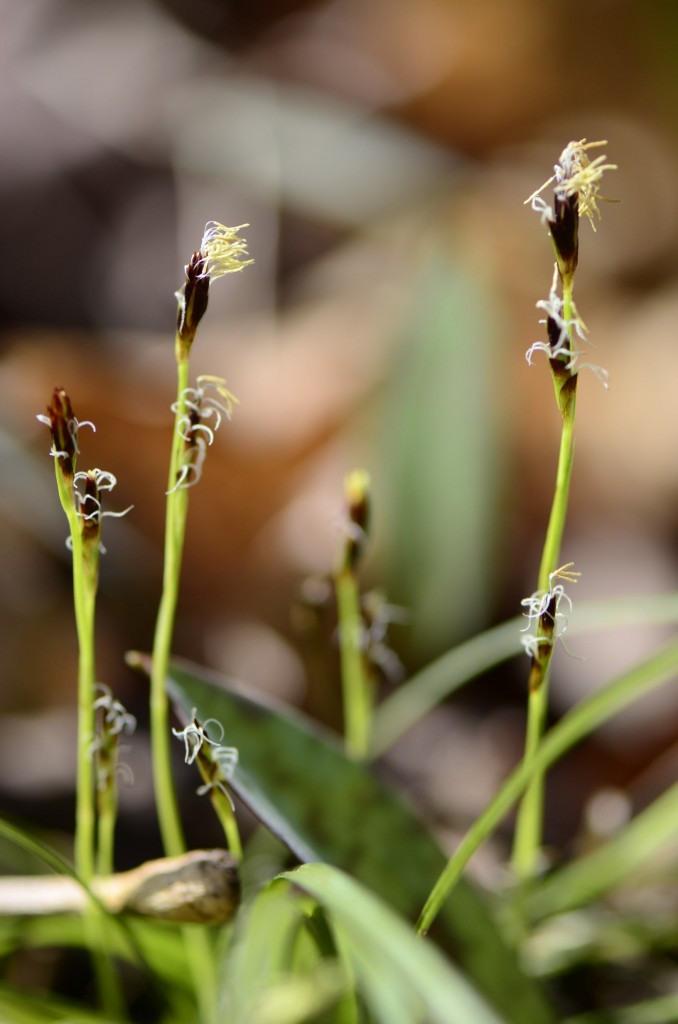 Carex pedunculata is one of my favourite spring flowers. It’s one of the earliest, starting with or even before species like Carex plantaginea. The plants are distinctive, with strongly reddened leaf bases, and dark red scales - particularly the staminate ones. You might confuse it with something from section Acrocystis, like C. pensylvanica. However, C. pedunculata has female spikelets on long, drooping peduncles arising low on the plant, quite unlike any of the Acrocystis. When the fruit matures, the perigynia are pubescent, and can form fleshy elaisomes, another characteristic shared with some of the Acrocystis species.

This one was part of a big patch on a small ravine slope, but it’s pretty common through the woods here. It’s very easy to overlook, though, because its ant-dispersed fruits are shed and gone before the end of May. There was a very delicate little Acrocystis sedge growing with it. I’m not sure what it was, too small for C. pensylvanica or C. complanata, so I’m guessing C. peckii.

Another one of my favourites is Beaked Hazel - Corylus cornuta. There was lots of it in the woods today. Another easy-to-miss flower. I finally got some good pictures of it last year, after trying without success for many years. Here’s one of them: 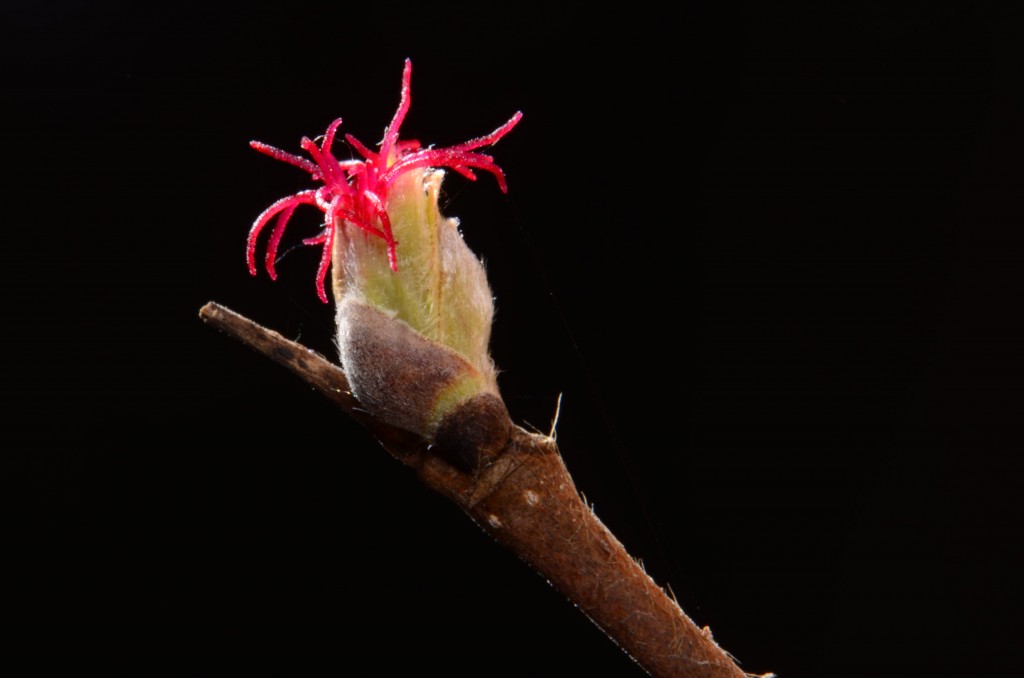 Despite lugging my tripod around with me all day, I only used it once or twice. With the wind blowing, it was not really that helpful. However, I’m finally coming to terms with modern technology, I think. I got stuck in a rut where everything I shot was ISO100, on a tripod, stopped down to F40+ to squeeze as much of ‘reality’ as possible into focus. Working under these restrictions limited my composition, I finally realized. Today, I left the camera on ISO200, and sure enough, the sky did not fall. I’m using a vibration-reduction lens, auto-focus, and a camera-mounted speedlight for fill-flash, and I’m quite happy with how sharp the images came out. I switched back to manual focus for the real close-up stuff, and used a pair of lens-mounted R1 speedlights when I needed a little more control of lighting, but that’s still less bother than a tripod. What do you think? Let me know how you deal with close-ups of bouncy flowers.